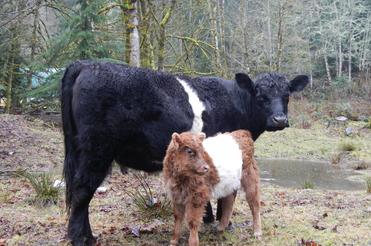 This winter Luna cow gave birth to a brown Beltie calf! We've named the calf "Ginger". Belted Galloway cattle are typically black with the white belt stripe, but there are also the less common dun and red coloured coats. So somewhere in Luna and Clancy's genetic pool, came the brown calf "Ginger". 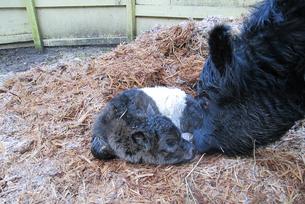 Night Owl Farm welcomed six new calves into it's herd this spring. This year the kids named some of the calves: Chocolate & Silky - it's all taste and texture when you're 10 years old.

We were welcomed to the new year with a fine new Belted Galloway calf. She was born early this morning amidst her herd here at Night Owl Farm. We weren’t expecting her so soon so she was a surprise and a joyful beginning to this new year.

We’ve named her “Ahvleen” meaning “new year” in Gaelic; she being a Gaelic breed from Scotland, and some of us being Celts too.

She seems strong and healthy – she can stand on her wobbly, too-long legs and nurse from her mother. It’s the first birth for her mother. The calf’s grandmother, who is an Angus-Jersey cross, is the herd matriarch and was born at Moonstruck Farm. The calf’s proud father, Clancy, was the first calf born here on the farm in 2008.

She’ll be the first birth of six calves expected over the next three or four months. We’ll keep you posted on future Night Owl Farm happenings. 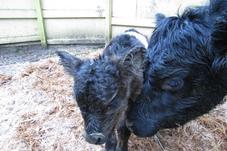 It has been almost a year since we opened Canada's first open-to-the-public Green Burial Cemetery on the land here. The natural cemetery is a wonderful complement to Night Owl Farm. It has been gratefully received by the community near and far.