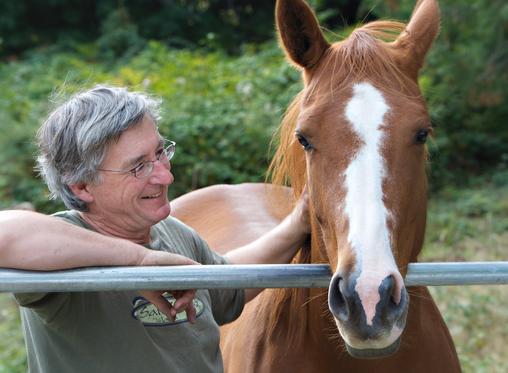 The first time I met Gavin Johnston he was removing a tiny ruby-crowned kinglet from a mist net in a backyard at Isabella Point. The bird was smaller than Johnston's thumb. Banding songbirds was part of a long-term study he was engaged in.

Now here I was with Johnston again, only this time I was in a 20-acre pasture just off Fulford-Ganges Road being curiously inspected by eight Belted Galloway cows, black at each end with a broad white band around their middle. Standing waist-high in the buttercups and daisies against the dark-green backdrop of Mount Maxwell, they looked like Oreo cookies, or Panda bears. Every so often I would be gently butted by an 1,100-pound Highland-cross cow, the friendliest of the bunch, reminding me that these weren't songbirds!

From tiny-ruby crowned kinglets to half-ton cattle is quite a change, and that's what I had come to talk to Johnston about.

"For me it's all about going back to my roots," Johnston told me. "I grew up next to a Holstein dairy farm north of Toronto – my earliest memories are of that farm. I worked there part-time until I was 16. The farm produced it's own feed and sold grain, as well as its milk production. I remember one year one of the cows had triplets. That got us on the front page of our local paper, me holding one calf, my sister holding another, and Brian Ratcliff holding the third."
The oddly-coloured cows I'd come to see at the Johnston farm were the Belted Galloways. Their contrasting colours had caused me to almost drive off the highway when I first saw them. Surprisingly, they are smaller when you're standing next to them than they look from afar, and the colours are not so clearly defined. The breed is naturally polled – they do not have horns. From far away they look just black and white – you can't see the brown that's also quite predominant. That's because Belties (as this breed is affectionately known around the world) have a double-hair coat that sheds rain and protects them from the harsh elements of the Highland moors where the breed originated.

"These cows will stay dry even in the harshest weather – weather that would see a Jersey cow soaked right through," says Johnston.

Belted Galloway cattle are an ancient breed – they are mentioned for the first time in 1790 in southwest Scotland. By 1865, they had a place in the South Tyne Agricultural Show. Mr. Bowes-Lyon, uncle to the late Queen Mother, was a notable breeder of Belties. His prize bull, "Boreland Royal Blend," is a direct ancestor of many of the Belties that exist today.

Belites are actually quite rare. They are currently listed with the American Livestock Breeds Conservancy as a "Watched Breed," which means there are fewer than 2,500 annual registrations in the U.S. and a global population of less than 10,000.
"As a free-range organic breed, they are perfect," says Johnston. "They can live outside all year, they look after themselves and they stay put. Jerseys and Angus are fence breakers; Galloways prefer to stay home. They thrive on poor quality forage, graze all summer and feed on grass and haylage in the winter. Our farm is 84 acres so we have plenty of pasture – they year I cut haylage at Cusheon Lake Farm as our wet spring prevented a first cut of hay. I harvested 40 tons from four acres, enough feed for four to five months, all with organic status."
"Why not sheep?" I ask Johnston. "The Fulford Valley has always had sheep."
"I never cared for sheep," he replies. "I know how to deal with cattle – I'm surprised at how things come back to me that I haven't even thought about in almost 50 years. I haven't worked with cows since I was 16, but the stuff that comes up is amazing."

Eventually, as the farm gets back into production under the family's stewardship, they'd like to see the herd grow to 10 brood cows, 10 year-and-a-half-year-olds, and 10 calves. Ten organic beefs a year would be full production.

As well, they would like to diversity by establishing greenhouses and bringing the farm's apple orchard back to life.

"We have a lot of work to do just to get the land back in shape," says Johnston. "Ideally we'd like to see the pH of the soil at 6.5 or higher. Right now it's down around 5. That means we have to add lime, which raises the pH and releases minerals like phosphorus, presently bound up and not available to plants."

"We view it as a lifestyle as much as a livelihood," says Johnston. "A good lifestyle that is helping people and helping the land. Not all of us get to choose our lifestyle and those of us involved in the resurgence of farming in the Fulford Valley are very fortunate. We have a chance to provide high-quality organic food and leave the world a slightly better place – many folds have to dance with the devil in some enterprise that's contributing to the degradation of the planet just to earn a living."

While Johnston and I lean against his tractor, his daughter Seanna's horses, Trevor and Sitka, stroll over to see what we are up to.

"Trevor was a cutting horse," Johnston says. "Put him in the pasture with the cows and he'll soon have them all bunched up waiting for instructions."

To me, the instructions for Trevor and the rest of the Night Owl gang seem simple enough. Stay on the course that has been set for the farm, Belted Galloways and all!

Many thanks to Aqua, Gulf Islands Living Magazine for allowing us to use the above story, featuring Night Owl Farm, from their Spring 2009 issue.